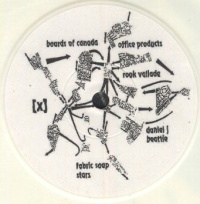 That tiny room at the beach was absolutely the perfect place for my first time. When we came together, I could feel the hairs growing on my chest. I saw my future. I saw my past. For a few minutes it was like being alive. They lived happily ever after. All my questions had been answered. All my fears disappeared. All that was left was a kiss. Every move we made was a kiss."

This same monologue is used in the track 'Sir Prancelot Brainfire'.