Difference between revisions of "Geogaddi"

Geogaddi, Boards of Canada's second full-length missive since 1998's Music Has the Right to Children, is without a doubt the group's most controversial record. Released suddenly in 2002 with little or no promotion, the record made its official debut in six churches scattered across the world: London, New York, Tokyo, Edinburgh, Paris, and Berlin. Only one interview (conducted via e-mail with NME) was given in connection with the release (Source).

Greeted with an initial lack of enthusiasm among some listeners who found the record to be 'more of the same,' critically and among the fanbase the album was warmly recieved. 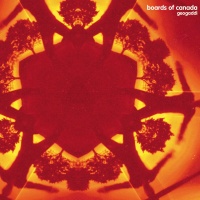 Pared down from an extraordinary 90+ tracks to a total of 23 (one of which is silence), Geogaddi has been described by Boards of Canada as "a record for some sort of trial-by-fire, a claustrophobic, twisting journey that takes you into some pretty dark experiences before you reach the open air again. It has a kind of narrative" (OOR, 2002)

Described in early interviews by Michael Sandison as "[reflecting] a chaotic period in [their] personal lives" ((OOR, 2002)), the brothers have subsequently admitted that the turmoil of the 9/11 terrorist attacks significantly influenced the tone and direction of Geogaddi. Said Michael:

"'Geogaddi' was kind of exorcising demons, and even after we'd set out to do a record like that, smack in the middle of working on it, 9/11 happened. I remember there were a few of us in the studio that day, and we just ended up glued to the TV for the whole day. I think the months after that pushed us into making a darker record, as I'm sure it did with a lot of bands." (Play Louder, 2005)

The controversial nature of Geogaddi, however, has more to do with the 'lyrical' content of the album than with its style or context. The hidden elements (back masked vocals, voices embedded deeply into the mix, etc.), while often present in their previous output, abound in unprecedented numbers on Geogaddi. The subjects addressed in these vocal samples range anywhere from the occult to the mathematical to the possibly satanic.

The following divisions will address some of the primary themes found throughout Geogaddi:

Satanism and the Occult

A common sentiment expressed in reactions to Geogaddi is summarized very well by the following Amazon.com customer's review of Geogaddi:

"A person can't listen to a BOC disc without feeling that there is something baleful in their music. These guys are weirdos (from the interviews they've done), which doesn't take anything away from what they may be trying to accomplish (make good music). I believe they are trying to do something more than just make good music. They are working for the side that I'm not on, so it would be deleterious to my soul to listen to the influential grooves they lay down. The evil is blatant" (Amazon, 2003).

Many have expressed similar feelings. So just how much satanic content really is there on Geogaddi (if at all)?

Answer: It's hard to say. Many of the so-called vocal 'easter eggs' found on Geogaddi are usually at best based on guesses or approximations of what is probably really being said. Boards of Canada have become increasingly dismissive in recent interviews of the theories and speculation built around the record:

"...all the mystery and magic and all this kind of nonsense that built up around the last record [Geogaddi] got to a point where it was just silly. People were understanding things from our music that we didn't put in there and were saying there was an evil undercurrent to everything. And we are not like that at all. It was a theme that we wanted to pursue on that record but people have understood from that that we always put secret, dark, sinister, and satanic things in our music. And that became more important than the music itself" (Pitchfork Media, 2005).

Yet despite their surprise with the public's reaction to their records (particularly Geogaddi and In a Beautiful Place out in the Country), Boards of Canada have done little to allay the fears of those troubled by the content. The references to the Branch Davidians are difficult to dismiss, and many subsequent decisions on the brother's part (such as the original Trans Canada Highway release date as well as the TCH trailer micro-site) have only further cemented their quasi-satanic image rather than eased debate.

As Marcus explained to URB Magazine: "[w]e're interested in all kinds of subjects, and I suppose we went through a patch of looking at cults and the mass mind control of religion and so on. We read a lot and pay attention to cultural events, but we view everything from a distance. We're up here in our observation point, gathering up data about all the weird shit that's happening in the world and spewing it out in some way in our music and visuals. The Davidians thing was about the shock of seeing the way the U.S. authorities handled it all" (Urb Magazine, 2002).

Despite this avowed interest in the occult, Boards of Canada has repeatedly maintained in interviews that "[w]e're not Satanists, or Christians, or pagans. We're not religious at all. We just put symbols into our music sometimes, depending on what we're interested in at the time. We do care about people and the state of the world, and if we're spiritual at all it's purely in the sense of caring about art and inspiring people with ideas" (OOR, 2002).

Even given these pronouncements from the brothers, the controversy surrounding the occult references in Geogaddi continues to burn. Perhaps it is this very mythos that gives Geogaddi its enigmatic and enduring appeal.

For specific discussions of back masked lyrics and other easter eggs, please see the individual track articles, especially the articles for "You Could Feel the Sky," "Alpha And Omega," "Dawn Chorus," and "1969."

It is also worthy of note that the standard version of Geogaddi clocks in at 66:06. Boards of Canada explained this fact in a 2005 Interview with Earplug Magazine:

"When we were discussing the length of the silence [Warp Records owner] Steve Beckett actually suggested to take it to a total 66 minutes 6 seconds, because then everyone would think it's the devil who made the album. And we just laughed."

The album contains 23 tracks which may relate to the "23 Enigma", a belief that all events are connected to the number 23. The belief is held by many who practice Discordianism, a parody religion centred around the "mindfuck" principle and the book "The Illuminatus! Trilogy".

The meaning and significance of the title Geogaddi are unknown. When asked about the meaning of the word "Geogaddi," Boards of Canada explained that "[i]t can have several meanings. We have our own definite idea of it, a combination of words that describe an idea we had at the time of writing it, but we want listeners to make their own minds up" (HMV Magazine, 2002).

The prefix geo-, taken from the Greek word for "ground" or "earth" (ge), is common to many words dealing with the Earth, such as geology.

Gaddi is the name of a nomadic Hindu tribe from Himachal Pradesh, in northwestern India. They are widely respected for their honesty, friendliness, and peaceful lifestyle. Crime is almost unknown in Gaddi villages. (NPR News article about the Gaddis)

Gaddi was also the surname of two father-and-son Italian painters of the early Renaissance, Taddeo Gaddi (c.1300-1366), and Agnolo Gaddi (c. 1350-1396). The work of both artists is largely concerned with angels, saints, and the Madonna.

Gad is a Biblical name, belonging to one of the Tribes of Israel, a son of Jacob, and a prophet of David. The prophet Gad is most notable for delivering to David the choice of three punishments from God in 2 Samuel: three years of famine, three months of fleeing from enemies, or three days of plague in your land. David allows God to choose, and 70,000 of his people die in three days from plague. (2 Samuel 24:11-15) The other Gad was the seventh son of Jacob and the founder of the Israelite tribe also named Gad; interestingly, like the modern Gaddi tribe of India (see above), the tribe of Gad were also nomads.

Gad was also the name of an ancient pagan god worshipped during the Babylonian exile in the sixth century BCE. Gad is described as the god of fortune, and the word gad itself refers to luck in Hebrew; its root is in the ancient Hebrew term for to divide or to share (as in fate being "meted out").

Considering these elements, the etymology of Geogaddi appears to suggest a connection between religion and the Earth — tying in somewhat with the pan-religious themes presented in "From One Source All Things Depend".