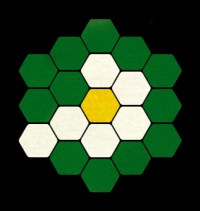 Aside from the sychronized numbers displayed in time with the "counting" segment of "A is to B as B is to C" and the time codes, a number of other numbers also appear repeatedly, in brief flashes.

The page itself was created by remote location, a one-man graphics design firm run by Adam Rodgers.