In numerous interviews, Boards of Canada have referred to "Red Moon nights", free-form outdoor gatherings with friends, music, movies and bonfires that Hexagon Sun has celebrated for years.

In April 2005, a cryptic image appeared on the Boards of Canada web page, seemingly referring to this practice. This image, and another following it, sparked a series of curious events as fans around the world collaborated in an attempt to determine the meaning of the mysterious images amidst red herrings and false clues posted by opportunistic hoaxers. 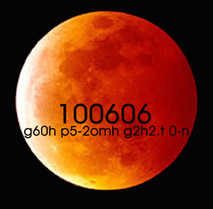 The first image appeared on or before April 2, 2005. The image is of a full moon, tinted red, on a black background. Over the face of the moon are two lines of text:

A user with the name "Family Photo Album" appears on WATMM and starts a new thread entitled "? ?????? ??????". FPA makes three posts in the thread, two containing animated GIFs containing pictures of Mike and Marcus, images of nature and the text "100606". An account of the same name also appeared on this date on the Twoism forum.

A user with the name "Matyrs Monument" appears on WATMM, starting a thread entitled "g60h p5-20mh g2h2.to-n" about the first code and containing references to the Pentland Hills. An account of the same name also appears on Twoism, making two posts with roughly the same content.

In a WATMM thread about the second Red Moon image, Martyrs Monument posts a link to an mp3 entitled "10June.mp3". MM also posts a second comment about the mp3.

In the Twoism Red Moon thread, a new user named Xerox posts a message claiming to have a friend working with BoC setting up an event of some sort "in the next week".

A banner ad for http://www.music836.com appears on the xltronic messageboard (thread). This site has a pop-up of a kaleidoscopic campfire image with the text "6/6/6" and a short looped background music with campfire sounds. 836 is second smallest wierd number.

Marytrs Monument suggests that more will be revealed today.

The link to rm.html from the contact page and the page at rm.html itself are now gone.

A group of users of the Twoism forum believe they have cracked the code. The method is detailed in the Red Moon Party thread. By inputting various portions of the numbers in the two Red Moon codes into a UK goverment mapping site, two closely-located positions in the Pentlands region south of Edinburgh are identified.

An artist named Pycho takes credit for the music836 site as a promotion for his new mp3 release.

In a new posted entitled "Farewell.", Family Photo Album posts another cryptic message. The post contains the phrase "Answered Pointedly" (emphasis added) which leads some to believe the party is located at Redpoint.

New user JimCanada posts a story about going to Redpoint on the 11th and finding signs of a bonfire and some melted tapes. In a second post, he posts a short mp3 that he claims was salvaged off one of the melted tapes.

Family Photo Album makes a new thread entitled "Time to cut the crap." in which he admits that his posts, as well as the JimCanada posts, were a hoax.

User twofingersism posts a report on the results of the expedition of Twoism users who journied to the Pentland Hills hoping to find a BoC party based on the locations Twoism users determined on June 5th. In short, no signs of BoC, but a lovely time was had by the hopeful searchers, who built their own fire and kicked back with some beers and good tunes. Fellow searcher Licolnshire Poacher contributes a photo of the group.

In the end, virtually nothing concrete is known about what (if anything) happened on June 10, 2006. Apart from the strange images posted on the official site, all additional websites, forum posts, etc. were ultimately found to be created by attention-seeking artists and opportunistic hoaxers. Meanwhile, no additional information (or even acknowledgment) about the incident has come from any official or trusted sources (including hexagonsun_official).

As it stands, the meaning of the strange images is as unknown as it was in the beginning.