In 2005, Boards of Canada released their third studio album, titled The Campfire Headphase. Perhaps the most organic of their publicly available output, The Campfire Headphase represents a significant departure both in mood and timbre from its predecessor, Geogaddi. "We decided to make an escapist soundtrack," Michael Sandison said in a 2005 Playlouder interview, "like a kind of sanctuary; a day-glo vista you can visit by putting the record on."

In place of the dense and highly electronic nature of Geogaddi, The Campfire Headphase favors a more stripped-down, acoustic approach, with a significantly reduced use of synthesizers. As Marcus pointed out to Playlouder magazine: "There's less use of synths on this record. We've leaned heavily towards a whole 'played, taped and sampled' backdrop this time. I guess sampling for us is different from a lot of other bands, because we routinely sample ourselves rather than other records, so most of the sound generation is coming from real instruments that we played ourselves, mostly recorded with microphones, and a lot of location recording. What you hear on the record is kind of a wall of sound created by sampling as many gnarled acoustic sources [as] we could find."

The most obvious of these acoustic sources is the frequent (and recognizable) use of guitar on TCHP. "With the new album," Marcus explains,"we deliberately went for a lo-fi guitar sound on a few of the tracks because we were going for a sun-bleached, Californian summer kind of sound, it's almost reminiscent of a Joni Mitchell sound in places."

Indeed, the brothers have admitted several times in interviews that the North American landscape (and its music) heavily influenced the direction of The Campfire Headphase. "This time we set out to make something simple that had shades of a road movie soundtrack, like the musical score to a surreal journey across a late 70's North American desert highway," Michael Sandison explains, also characterizing the record as something "like a futuristic western or something...but [always with] something subtle and surreal going on in the tracks to remind you that you're hearing something that has been tainted or spiked in some way by unfathomable futuristic technology. It's maybe like campfire music played by android cowboys."

But whatever the synthetic undercurrent, The Campfire Headphase is noticeably lacking in one of Boards of Canada's signature sounds: children's voices. "That was a deliberate thing," Marcus explained to Earplug magazine. "We got fed up with people saying that we're a formulaic band that you could kind of describe in a couple of sentences...I think it can become really dangerous for a band if you don't have a certain level of self-consciousness about these things. You always have to stay a few steps in front of your audience. We always have people putting fakes on the Internet before a new record is released, and the fakes are always really electronic with little kids' voices and things like that. Probably next time around all the fakes will include wobbly guitars like the ones we use on the new album The Campfire Headphase (laughs)."

This sort of self-conscious reaction, however, may account in part for why opinion on this record has been so divided. When asked by Pitchfork about whether or not the brothers feared being pigeonholed, Michael responded that "[t]he new record is probably the slowest record that we've done. And it's got guitars on it as well. This is something that we've done slightly deliberately. We knew that we had to break away from this thing [being pigeonholed]. It bothered us that if you go into the big stores our stuff is always sitting in the dance music section. We never made a dance record in our entire career but our stuff still gets thrown in there. Our drive with this record is to try and get us out of the dance section and into the main section with all the other bands, like ABBA and A-Ha. We're just a band. Not an IDM band, not an electronic band, and not a dance band."

This conscious break with the conventions of the so-called IDM/Dance aesthetic (which so informed their previous work) have lead many to describe the record as boring or watered down. Pitchfork's Mark Richardson complained that "Campfire is a sluggish record, weary, pointed edges dulled as if by the march of time. Boards could previously be counted on to offer a display of crisp, forceful drum programming to jar you out of your narcotic haze ("Telephasic Workshop" and "Gyroscope"). The Campfire Headphase is all midrange, the mid-tempo shuffles putting the mind-boggling array of instrumental processing front and center."

Yet for some, the very same departure yields the record its charm, even garnering some textural comparison to My Bloody Valentine's classic "Loveless." Differences of opinion aside, the record continues to be a favorite among many fans, and in any case, probably our best indicator of what is yet to come. 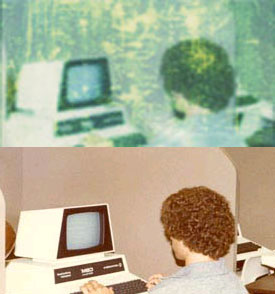 The liner notes include a grid-like collage of apparently seventies-era photos, degraded in a manner similar to the cover. The source of a few of these images have been discovered: